Meet the shining colors
of the ancient Japan - now. 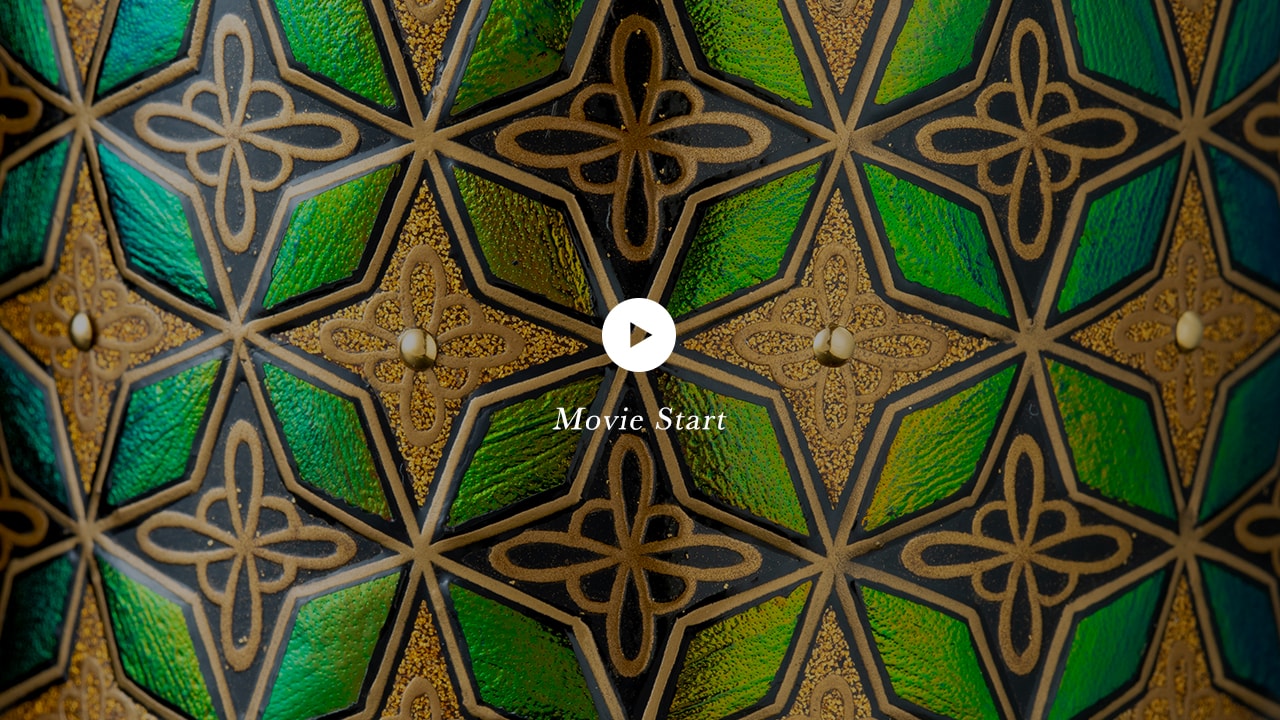 The shining Japanese lacquerware
made by Wajima-nuri.

The Tamamushi Shrine was made in the Asuka period (a period in the history of Japan lasting from 538-710) and it is designated as a Japanese national treasure. This vintage craftwork is also known as a cherished object of the Empress Suiko.

It was said that the lacquerware was covered by the colorful shining wings of the jewel beetle under-neath its fine metal open-work, but as time went by it lost its former brilliance.
Still after several decades, the jewel beetle has an astonishing shimmering quality that is mysterious from every angle, and the colors lead you to a utopia which touches the bottom of your heart.

This lacquer technique was created for the reconstruction project of the „Tamamushi Shrine“ which is a national treasure owned by the Honryu Temple.

The glaze of the Tamamushi Hane maki-e decoration is absolutely one of a kind. 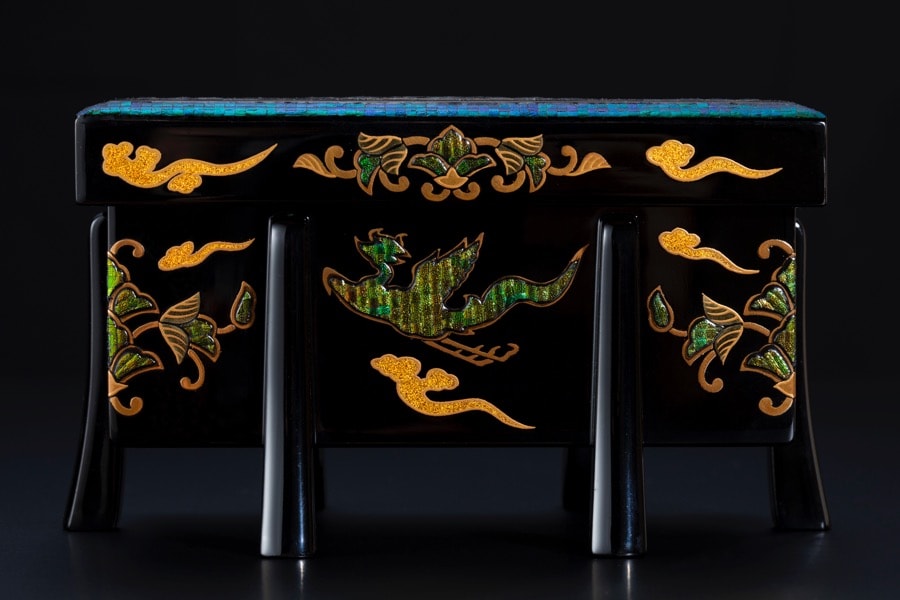 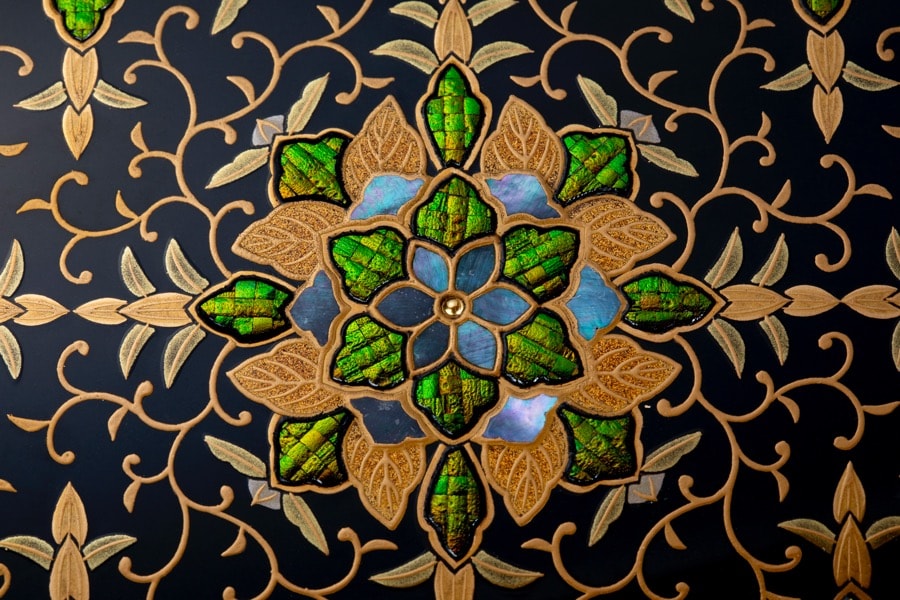 1989, the project of reconstructing the national treasure „Tamamushi no Zushi (miniature shrine)“ was established. It started with collecting 6000 pieces of jewel beetle wings which were presented to maki-e masters who were assembled from all over Japan to restore this style of art.
Another task was to form a row with 30.000 jewel beetle wings on the urushi-painted (urushi is a natu-ral lacquer derived from tree sap) side wall to illustrate Buddhist themes. It should be an evolution of the Tamamushi Shrine, a so-called: „Tamamushi Shrine of the Heisei era“.
Toshiaki Tateno, the maki-e master, received the best reviews on his work from among all the masters.
„It was an honor to get the chance to be a part of this project. I have never felt so fulfilled in my own career.“ Tateno affirmed. Nonetheless, the extraordinary challenge of working with the 3cm beetles is needless to mention.

The lacquer art: Maki-e’s first process is to draw on the surface of lacquerware with urushi immediately followed by gold and silver powder being sprinkled before the urushi lacquer dries. To show detail in the paintings abalone, pearls or coral are used as well. The 7-colored wings of the jewel beetle were ini-tially considered as one of the materials used for the art, but the wings contain a lot of oil that even the strong urushi lacquer couldn’t affix.
The masters were helpless to use the colored beauty because there was no adhesive strong enough for the wings.
After many studies and experiments under strict conditions, the masters discovered an adhesive tech-nique which did not lose the brilliance of the wings’ surface.

In 2008 it was possible to build the Tamamushi Shrine with 6000 pieces of wings, in the same manner as 1400 years ago, using the same lacquering and maki-e techniques. In addition, the second Tamamu-shi Shrine (using modern technology) contains 36,143 pieces of wings to decorate the wall with maki-e.
Those two shrines are called: „The Tamamushi Shrines of Heisei era“ and they were dedicated to the Honryu Temple.

A branding opportunity was given by the president of the Art Forest Museum (Chano Yu no Mori), Kinta Nakata (✝︎2007) , who was a passionate collector of Tamamushi maki-e tea sets.
Mr. Nakata was one of the leading curators of Tamamushi Hane maki-e which uses the very first tech-nique to glue the jewel beetle’s wings on urushi covered objects. He conveyed the gorgeousness of this art work and emphasized traditional Japanese culture, as well the masters’ techniques to the whole world.
In 2007, exhibitions were to be held in the Metropolitan Museum of Art in New York and in the Na-tional Palace Museum of South Korea. However, Mr. Nakata passed away right beforehand and the ex-hibitions had to be cancelled. His dream of exhibiting these treasures is still waiting to come true. His collections of Tamamushi Hane maki-e are now exhibited only in the Art Forest Museum (Chano Yu no Mori) located in Hida-Takayama.
Our aim is to fulfill the strong intentions of Mr. Nakata and create the branding to introduce the world to this Japanese traditional craftwork and the techniques behind it.
The “Tama” („Gyoku“ in the ancient Chinese) in „Tamamushi“ is translated into English as „gem“, since its mysterious glow is just like that of jewels. That’s why it is called the „jewel beetle“ in Japanese.
The mysterious shine of the Tamamushi Hane maki-e decoration is enjoyable from every angle.
The seven colored rainbow gem is succinctly translated in Japanese as „Gyoku Kou“ - which has be-come the name of our brand.

The studio Wabisabi was established in December 2012 by the maki-e master Toshiaki Tateno and the CEO Kazuhiro Une that is a manufacturing and sales company based on Wajima painting with the focus for Maki-e decoration. The specialized style of the studio Wabisabi comes from artistic pursuits involv-ing natural themes (Kacho Fugetsu) which is the master Tateno’s art style.
There are several art works using geometrical patterns arranged in traditional themes.
Our workshop is located in Wajima, the home of urushi. It is a member of restoration efforts for nation-al treasures such as the shrines and temples registered as important cultural properties.
Wajima-nuri, Japan’s proud lacquerware, is implementing the everlasting knowledge of the masters to achieve faithful restoration.